A 4 Year-Old Asks of Love

There was a recent uproar in the world of ignorance when ESPN, the world-wide leader in Deification & OverDramatizing the Lives of Athletes, briefly broadcast 2 adult men kissing… ON THE MOUTH.  In the post-Janet Jackson’s-boob-world!!!

It was a moment in the lives of Michael Sam and his boyfriend, Vito Cammisano.  Sam is the first openly-gay collegiate football player, from the University of Missouri, and was the Defensive Player of the Year in the SouthEastern Conference.  When Sam was drafted by the St. Louis Rams in the 7th round of the NFL Draft, cameras captured the moment/announcement/phone call from the Rams on TV.  In their excitement and happiness, Sam and Cammisano kissed… ON THE MOUTH. 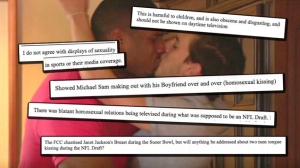 And my oldest son, who is 4.75 years old, happened to see it.  As did I.  It raised my eyebrow, because I immediately wondered how much of an issue this non-issue would become in social media, and then later, the starved-for-content Media.  And knowing my son’s inquisitive nature – he once woke up with the question “Where do we go before we’re born?” – I expected him to ask me something about the ON THE MOUTH kiss he just witnessed between two men.  My family is very affectionate; we are huggers, squeezers, cuddlers, snugglers, pinchers, and kissers with those whom are comfortable with it. But among the men, we don’t kiss.  So I expected a tough question…

So he turns to me and asks, “Dadda, why did those two boys kiss each other?”

And here’s what I said, after my years of living with relationships, learning from loving, and understanding what there is to understand about People and Love…

“Well buddy, those boys love each other.”

And he asks, “Do boys love each other like you and mommy?”

And I can’t extrapolate genetic predisposition or evolutionary precursors of attraction based on brain chemistry and/or the shape of a woman’s hips as a signal of fertility and loin-revving physicality, so in a moment if divine inspiration and minor panic, I told my son this…
“Love is who you like the most.
Most boys like girls. And most girls like boys.
Some boys like boys.  And some girls like girls.
But, just be nice to everybody no matter who they like, and be extra nice to who you like.
And if somebody’s not nice to you, then stay away from them.”

He turns to me and says, “Oh! OK,” and then he paused to work this out in his head.  Then he gets a big smile on his face and he says... “Well I really like that girl Maggie in my class, she is good at coloring and smells like pancakes.”

And I said “Well that’s great, she tries hard at art, and pancakes are always good. So be nice to everybody, ok?”

And I was happy and proud to hear that.
But then he asked me a question I couldn’t answer.  He was loading up with a question that even the deepest of thinkers, the most romantic of romancers, those with far more hues than 50 Shades of Grey and people with remixes of Song of Songs could find an answer for in the 271+ years of human history.  A question so heavy that sinkhole opened in my brain.  My son, not yet 5, asked me…

“So… when do girls start being nice?”

I’d like to address the pre-birth location question now.

Geoff Lott is a "thinking person's comedian" as much as a "drinking person's comedian." Born and raised near Seattle, his writing and comedy is Cloudy with a Chance of Hope. Less offensive than your average nightly news program, Geoff is opinionated with intent, and a rebel without a clause. A comedian, actor, dad, husband, co-worker, weirdo, and great friend, Geoff Lott has a sense of humor like a sommelier's sense of smell; aged well, with a hint of dark chocolate, Irish whiskey, and leather. Credits and press kit available upon request!
View all posts by Geoff Lott →
This entry was posted in Parenting, Relationships and tagged Advice, Boys, Dad, Gay, Geoff Lott, kids, Kindness, love, Parenting, Relationships, Sons. Bookmark the permalink.

2 Responses to A 4 Year-Old Asks of Love