In the movie Ghostbusters, the heart of the operation is really the Ectoplasmic Containment Unit.  Some would argue it’s Annie Potts character Janine, or even Dana Barrett’s neighbor Louis, played to the understated hilt by Rick Moranis.  But no… it’s the ECU.  The ECU holds all of the captured apparitions, ghouls, and roamers captured by the gang.  Until Walter “Dickless” Peck from the City shuts the show down. 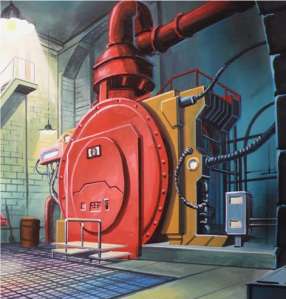 You can get a shitload of diapers in here.

Akin to the ECU is the Diaper Genie 2.  It uses a footpedal-top door-capture&drop system to receive and deposit diapers of various fill levels/matter.  From the super-peeped to the lagging loader, it can swallow up almost anything you toss down it.  Beware… there are two pieces to the DG – and thus, a greater expense is incurred.  We were given a DG as a gift, and basically have to pay for the bags every month.  Special bags. Bags that you couldn’t possibly replicate with something from the grocery store.

The DG has a proprietary bagging system that starts at the top with a sort of bag-sphincter.  The plastic extends from within the sphincter, ties-off to become a bag, and then drops down below the diaper air-lock.  The top of the DG opens, you drop the diaper into the chamber which is about the size of a coffee can, then release the footpedal.  That allows the dipe to drop into the abyss of the DG, effectively packing a deeper and tighter “poop sausage.”  Bags’ll run you about $7-$9 depending on where you buy ‘em.  We’ve found good deals at Target.  We’ve also found some weird accents and smells at Target.  Onward.

So here’s the issue.  The idea of the DG’s crapper-keeper is to allay the onslaught of hours & days-old dipe odors.  Those can range from warm canteloupe to a box of blood-soaked peanuts from the Civil War.  The solid-food days of the toddler’s diet are the creators of epically weird poops.  Into diapers go said poops.  Said dipes go into said Genie.

And when you rub that lamp, SIM SALAABIM… The Diaper Genie comes out and grants you 3 wishes, all of which are “MAKE IT STOP BECAUSE MY EYESOCKETS ARE BURNING!”  Also known as “The Ghost Of Breakfast Past,” the DG upper-chamber traps all the up-waft of the dipe-loads of the deep.  You pop that top and get an odiferous uppercut of kid butt.  I’d rather a Sta-Puft Marshmallow Man threaten my high-rise.

So, between the cost of the Genie, the bags, and the lingering gross-ghost, I’d pass on the Diaper Genie.  Beware to all who rub the lamp.  Frankly I find it weird poop just keeps going from one hole to another, unless you work in corporate America, where it all rolls down the aisle of your cubicle… Another time…

Geoff Lott is a "thinking person's comedian" as much as a "drinking person's comedian." Born and raised near Seattle, his writing and comedy is Cloudy with a Chance of Hope. Less offensive than your average nightly news program, Geoff is opinionated with intent, and a rebel without a clause. A comedian, actor, dad, husband, co-worker, weirdo, and great friend, Geoff Lott has a sense of humor like a sommelier's sense of smell; aged well, with a hint of dark chocolate, Irish whiskey, and leather. Credits and press kit available upon request!
View all posts by Geoff Lott →
This entry was posted in Review and tagged 2, Blog, Dad, Diaper, Genie, Geoff, Lott, Product, Review. Bookmark the permalink.