Posted on October 30, 2013 by Geoff Lott
I’m still not sure if I like crowdfunding, the ability to ask friends or strangers for, and sometimes receive, financial backing for your pet projects.  It’s not exactly on-line panhandling, but it’s not really fundraising.  It IS, I mean, yeah, you’re raising funds for whatever it is you haven’t saved for, but do you really appreciate it and let it be YOUR baby?  In this case, we’re talking fundage, financially, money.  Mmkay?

Admittedly, I did use “GoFundMe.com” earlier this year to help a single mother get her car repaired.  She had no money, was living in a church, and needed a new transmission in order to get her car running to get around for job interviews.  The need was there, the means were there, so I cobbled together a few things and posted it and promoted it.  We made our goal in a few days, and I can only thank the kind people who gave anywhere from $10 to $50 to $300.  It was an inspiring influx of empathy and care, and very much appreciated.  There’s always more to the story, of course…

Of course, like anything that goes online, it had its share of trolls asking why a transmission cost of $600-something (labor included) was the target, why she didn’t just get a better car, etc.  By ignoring some of them or calling them out for being dipshits we were able to just focus on the goal.  Don’t feed the trolls.

I’m not going to say this isn’t some sort of meta-trolling about the intent of using crowdfunding to fill a project’s financial gap.  I’m not tearing a rotator cuff to pat myself on the butt for a job well done, either.  Just stating what is possible when you present a need to people who want to help.  It was really great to see it come together.  Hell, what would YOU do with your pet project if you had another $1,043 laying around?  Would you use it properly?  Could you/I be THAT accountable?  That’s why I wonder how much a person can appreciate the gifts they promote themselves to receive.  Some people are making movies. Some people are trying to pay off medical bills.  Who’s to say who’s right?  The people with the money, that’s who’s.

The “more to the story” is that I had two situations where fundraising for a cause took very different turns.  In one, I produced a comedy show to raise money for a family friend whose mom had been left with a mountain of medical bills after her husband passed away.  I don’t know how much was raised, all I know is the place as packed with concerned friends and a lot of love.  We did very well, and my friend’s mom was incredibly appreciative.
The other turn was that a person who I did something financially-beneficial for via fundraising really didn’t take advantage of the upturn.  There was an option there to move ahead with what they had been asking for – and given, but they either moved at a glacial pace as to appear immobile, or just bided their time.  Then kept hinting how they needed more of this, or didn’t have any of that.  In a side-project we also provided a lot of resources to help them get back on their feet, but nothing in the form of straight-up cash.   And pretty soon it seemd as if they’re just hoping to get more of something without putting out anything.  As much as I want to see everybody doing better for themselves, I want to see people DOING, unless some sort of crippling disease has taken their ability to leave the house and interact with people or bring me homemade cookies and/or dark beers from around the world.

The Need exists for a little something more; schools, food banks, neighbors, drag show open mic nights, etc.  People have needs that aren’t met because of – pick a reason.  And if you can help meet their needs, do it.  The 1% that made 95% of the income won’t.  Our taxes aren’t going to make up for it.  Gotta act locally.

Reminds me of a story my maternal grandfather told me.  There was a bear who grew up near a campsite.  Every Monday he would go to the dumpsters and pick through food and he grew strong and clever, but a little fatter than the other bears in the rivers eating salmon.  One Monday morning a park ranger saw the bear and thought he may be a hazard, so he tried to scare him off.  The bear didn’t understand the tactics;  this was garbage, nobody wanted it, why can’t he have it?  But the ranger didn’t want the bear coming into the park at other times, and didn’t understand the bear’s intent was simply to eat from a reliable source at a non-threatening time.  In the end, the bear starved to death after getting his nose caught in a plastic holder from a 6-er of Miller tallboys.
The Lesson: You can always get garbage, the good stuff takes some effort, and park rangers are usually assholes. 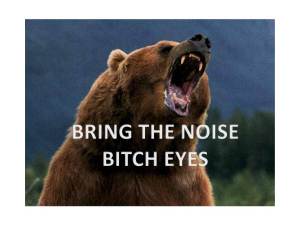 Geoff Lott is a "thinking person's comedian" as much as a "drinking person's comedian." Born and raised near Seattle, his writing and comedy is Cloudy with a Chance of Hope. Less offensive than your average nightly news program, Geoff is opinionated with intent, and a rebel without a clause. A comedian, actor, dad, husband, co-worker, weirdo, and great friend, Geoff Lott has a sense of humor like a sommelier's sense of smell; aged well, with a hint of dark chocolate, Irish whiskey, and leather. Credits and press kit available upon request!
View all posts by Geoff Lott →
This entry was posted in Interactions and tagged Advice, Annoying, Comedy, Critical Dad, Friendship, lessons. Bookmark the permalink.